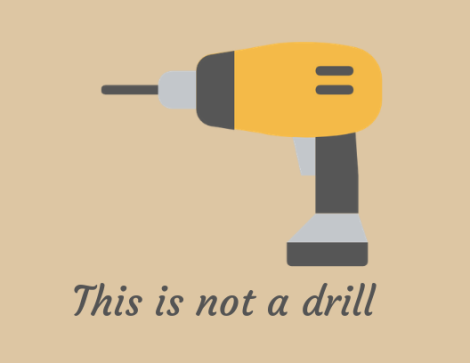 …because it’s just an image

…because it’s an emergency, a Climate and Ecological Emergency, a collapse of our planet’s operating system.

But, because of the complexity of the situation, our clever brains have ways of reassuring us that this IS a drill. We might variously tell ourselves that:

These frames of thinking are formed collectively, partly arising out of physiological reactions to news of threat, combined with (at least in the UK, for many*) the absence of actual immediate harm or direct witnessing of impacts. Partly these frames are deliberately constructed by propaganda, a ‘Treachery of Images’, from lobby groups denying human-caused Global Warming and delaying climate action over the past four decades.

If we were to recognise the way that these frames are constructed socially and industrially, can this help us flip the thoughts into more positive and alert framing?

What would these statements sound like if they were flipped?

Tools that might be useful to help sustain these flipped frames include:

The Precautionary Principle, work by Rupert Read and others, that encourages decision-making that anticipates future risk and avoids action unless you are completely certain that no harm will be done, to humans, other species, places and planet.

Values and Frames, work by the Common Cause Foundation, to help understand how mental frames are constructed and how they can be shifted into more compassionate values.

Resilience, building a world of resilient communities, providing alternative models for how to live (which can influence our mental frames).

Transition Network, a movement of communities reimagining and rebuilding our world.

New Way, Old Way, a growing chart of ways that mindsets/approaches could change, from the Wellbeing Economy Alliance

This table where I’ve laid out the frames explained in this post.

And this tool about Climate Coping Strategies

*This blogpost is intended to address people in the UK or similar places where impacts may not be directly experienced, or known as such.

*Update: When I wrote this, I hadn’t known that Extinction Rebellion’s forthcoming book was called ‘This Is Not a Drill‘. I might have seen the phrase on social media, without knowing the context, which gave me the idea for this post.

For the planet to sustain life so that we can live in abundance, we need to learn together and fast. Our cultural values need to shift towards an ecological way of knowing.